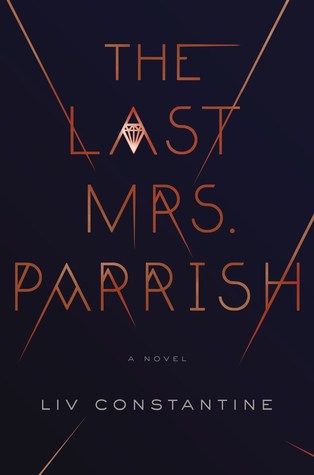 July’s pick was The Last Mrs. Parrish by Liv Constantine. Brought by Amy.

Amber Patterson is fed up. She’s tired of being a nobody: a plain, invisible woman who blends into the background. She deserves more—a life of money and power like the one blond-haired, blue-eyed goddess Daphne Parrish takes for granted.

To everyone in the exclusive town of Bishops Harbor, Connecticut, Daphne—a socialite and philanthropist—and her real-estate mogul husband, Jackson, are a couple straight out of a fairy tale.

Amber’s envy could eat her alive . . . if she didn’t have a plan. Amber uses Daphne’s compassion and caring to insinuate herself into the family’s life—the first step in a meticulous scheme to undermine her. Before long, Amber is Daphne’s closest confidante, traveling to Europe with the Parrishes and their lovely young daughters, and growing closer to Jackson. But a skeleton from her past may undermine everything that Amber has worked towards, and if it is discovered, her well-laid plan may fall to pieces.

With shocking turns and dark secrets that will keep you guessing until the very end, The Last Mrs. Parrish is a fresh, juicy, and utterly addictive thriller from a diabolically imaginative talent.

Wow!  What a gathering.  (still within state guidelines of course)  After a long six months of not seeing fellow Dine and Opiners, we finally got together in a large way.  So much has happened – graduations/colleges/school starting/a baby!  We definitely had a lot of catching up to do.

With the virus still hanging around, we opted for a backyard format with takeout from Deejai Thai.  We faced mosquitos and George the cat defecating in the flower bed, but let’s move on…

The dress code – black leggings seem to be a common theme.  I have only seen people from the shoulders up since March so I have noted this and already have a pair in my amazon cart.

The book – The Last Mrs. Parish – A two part psycho-marital thriller that everyone actually read and finished!  Most agreed that the part 2 (Daphne) made up for the less interesting Amber point of view.  We discussed the difference between a pyscopath and sociopath – the difference being that a sociopath has a small amount of empathy.  Most agreed that there were not a lot of characters we empathized with (maybe we’re the sociopaths?), but the Mom and Douglas were at the top.  I was really hoping that gun would be put to good use.  Shobha came in late and boldly declared she felt a little bad for Amber.  Let’s just say that was an unpopular opinion.  Overall the book was given a thumbs up- a couple of sideways and maybe a thumbs down.  It was a fun read and would probably recommend, but not sure it deserves a unanimous thumbs up so thank you to the dissenters among us.

The Baby – Baby Vaughn will be making her arrival in February.  Sondra is excited to plan a baby shower and of course there will be books involved.  Think of the books that you didn’t mind reading over and over and over again.  That’s what we’re going for.

The Picks – In true Suhanthi form, she gave us a lot to choose from including actual books.  Three fiction and three non-fiction.  The non-fiction books were all had the Gates name somewhere on them (written by Melinda or Bill endorsing them).  The fiction books included:

-The Language of Flowers by Vanessa Diffenbaugh

-Life by Lu Yao and others

-The Weight of Ink by Rachel Kadish

We selected The Language of Flowers.

No book club evening would be complete without a picture and overstaying our welcome.  Mark finally got off his Zoom call and was promptly summoned for a picture.  After staying outside the entire evening, we all walked into the house loudly and Sylvia emerged from her room to yell at us. (she was in the middle of a meditation app and we took her away from her zen garden she told me this morning).  I do appreciate the direct feedback versus the usual dirty looks and lights being turned on.  Ahhhh…its great to have the band back together! 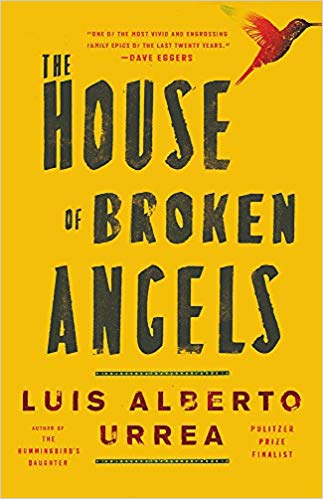 The House of Broken Angels

The House of Broken Angels is a sprawling and epic family saga helmed by patriarch Big Angel. The novel gathers together the entire De La Cruz clan, as they meet for the final birthday party Big Angel is throwing for himself, at home in San Diego, as he nears the end of his struggle with cancer and reflects on his long and full life.

But when Big Angel’s mother, Mama America, approaching one hundred, dies herself as the party nears, he must plan her funeral as well. There will be two family affairs in one weekend: a farewell double-header. Among the attendants is his half-brother and namesake, Little Angel, who comes face to face with the siblings with whom he shared a father but not, as the weekend proceeds to remind him, a life.

This story of the De La Cruzes is the story of what it means to be a Mexican in America, to have lived two lives across one border. It is a tale of the ravaging power of death to shore up the bits of life you have forgotten, whether by choice or not. Above all, this finely wrought portrait of a deeply complex family and the America they have come to call home is Urrea at his purest and best. Teeming with brilliance and humor, authentic at every turn, The House of Broken Angels cements his reputation as a storyteller of the first rank.

And so we (Dine & Opine) met. We were going to meet at a new taco place- however after waiting for over 45 minutes for our table (was suppose to be 15) we left and ate at Tavern on the Tracks. Being the only member to finish this book (even though we had an extra week to finish); others were in various sections of the book; I say that this book was… not worth the read. The many characters were so numerous and many not even necessary. It was almost like the author tried too hard. Here is the advice:

Read the First Chapter. Read the Last Chapter…. boom. That will sum up the story.

Needless to say this book received a:

Next book was brought to us by Hetal: The 7 1/2 Deaths of Evelyn Hardcastle by Stuart Turton. Better start reading!