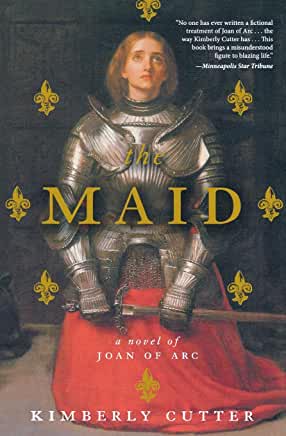 September’s book pick was The Maid: A Novel of Joan of Arc by Kimberly Cutter. Book pick was brought by Jill.

“Was she a saint or a witch? A visionary or a madwoman? Or an extraordinary peasant girl who, at God’s bidding, led an army, saved France, and paid the price by burning alive? . . . Kimberly Cutter’s portrait of ‘Jehanne’ as a strange, gritty teenage tomboy and true believer is compelling.” —USA Today

It is the fifteenth century, and the tumultuous Hundred Years’ War rages on. France is under siege, English soldiers tear through the countryside destroying all who cross their paths, and Charles VII, the uncrowned king, has neither the strength nor the will to rally his army. And in the quiet of her parents’ garden in Domrémy, a peasant girl sees a spangle of light and hears a powerful voice speak her name: Jehanne.

The story of Jehanne d’Arc, the visionary and saint who believed she had been chosen by God, who led an army and saved her country, has captivated our imaginations for centuries. But the story of Jehanne—the girl whose sister was murdered by the English, who sought an escape from a violent father and a forced marriage, who taught herself to ride and to fight, and who somehow found the courage and tenacity to persuade first one, then two, then thousands to follow her—is at once thrilling, unexpected, and heartbreaking. Rich with unspoken love and battlefield valor, The Maid is a novel about the power and uncertainty of faith and the exhilarating and devastating consequences of fame.

I think today seems like a good day for a recap!  I know you’ve all been on the edge of your seats awaiting a recap from The Maid discussion in October so here it goes.
A few of us met early at Seaboard to give Shobha a chance to visit two of the many establishments in her new town of Matthews.  Shobha was enjoying a brew (Seaboard is a brewery and wine bar/shop) when the girls from Waxhaw arrived (just a touch late).  The weather was beautiful though I had been concerned about the temperature and had multiple conversations with the staff/owner at Sante, our restaurant destination, to determine the best dining area for us.  The owner finally convinced me that dining outdoors would be lovely for the evening and I chose the back courtyard.  He was right, it was perfect weather for dining al fresco and we had the courtyard to ourselves which is always a plus.  Since I’d had so much interaction with the Sante folks already I didn’t want to be late for the reservation so Susan and I manned up, chugged our wine and headed on down the street to Sante.
Once everyone arrived, we ordered some appetizers as usual; luckily talking Shobha out of the escargot.  Wine all around and on to The Maid.  Generally everyone knew of Joan of Arc but not much about her or why she happens to be the patron saint of France. I found the story very interesting and we had a fairly in depth discussion about whether she was delusional, or was actually sent from God on her journey.  A mixed bag of feedback there that generally followed the level of religious faith each person has.  The more faithful among us do believe God has chosen ones to do his bidding (and I truly hope if that’s the case Susan gets picked next because I’ll know then she’s not crazy); while those of us with a more minimal amount of religious faith leaned towards the crazier side of Joan’s story.  Having said that, there is no doubt that she led troops to battle, she survived a fall from high up in a castle with no injuries, turned the tide of the 100 years war and in the end was burned at the stake.  As for the words we used to describe her (per Jenn’s inquiry) Brave, Crazy, Faithful…there are others but my memory…  The book was overall thumbs up with a couple thumbs down thrown in.  On to picks, hopefully you all know by now we are reading American Dirt by Jeanine Cummins.