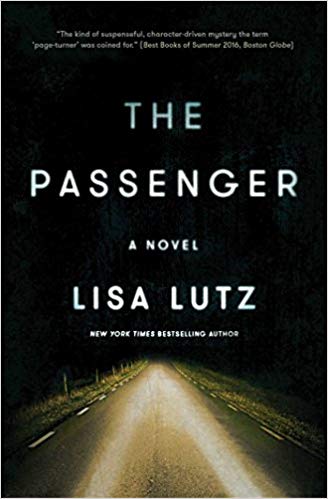 The Passenger: By Lisa Lutz

In case you were wondering, I didn’t do it. I didn’t have anything to do with Frank’s death. I don’t have an alibi, so you’ll have to take my word for it…

Forty-eight hours after leaving her husband’s body at the base of the stairs, Tanya Dubois cashes in her credit cards, dyes her hair brown, demands a new name from a shadowy voice over the phone, and flees town. It’s not the first time.

She meets Blue, a female bartender who recognizes the hunted look in a fugitive’s eyes and offers her a place to stay. With dwindling choices, Tanya-now-Amelia accepts. An uneasy―and dangerous―alliance is born.

It’s almost impossible to live off the grid today, but Amelia-now-Debra and Blue have the courage, the ingenuity, and the desperation, to try. Hopscotching from city to city, Debra especially is chased by a very dark secret…can she outrun her past?

Dine & Opine met at Lucky Lou’s Tavern… we try to match something in the book to where we eat. In this case it was a dive bar. We sat down, ordered drinks and after a brief catch-up between everyone in attendance, we began to discuss the book.

I can tell you that we went through many of the questions found on LitLovers. The questions were fairly easy to answer and there was a bit of discussion. However nothing really to write home about. We all thought the book was an easy read and was a good “vacation” read. We did not think that it was a book that “wowed” us. The story was good, characters were mostly developed. That brings up one thing that the group did agree on… Dominic. His character seemed to be one that was left undeveloped. We wished that there would have been a bit more information on him. For his character to respond to Nora that way (Finding her interesting enough, etc) there has to be a back story on his character.

Overall we decided that this book receives a Sideways Thumb. It isn’t a book that we would recommend when asked for a good book you recently read; but it is a book that would be recommended to someone who enjoys an easy read, slight thriller book.

Next Month’s Book: The House of Broken Angels By Luis Alberto Urrea

Book was picked by Jennifer