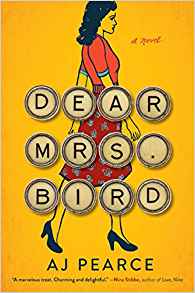 Let me start off by saying that everyone LOVED this book cover. And I do mean everyone. The letters- set like an old typewriter’s keys… come on? Who wouldn’t love that and the colors? This cover captured your heart and sadly, that is about it for this book.

When reading the synopsis and reviews for the book- you read words like Charming, Plucky and Fresh to describe this story. For those that have not read Dear Mrs. Bird- Here is the synopsis:

“Emmeline Lake and her best friend Bunty are doing their bit for the war effort and trying to stay cheerful, despite the German planes making their nightly raids. Emmy dreams of becoming a Lady War Correspondent, and when she spots a job advertisement in the newspaper she seizes her chance; but after a rather unfortunate misunderstanding, she finds herself typing letters for the formidable Henrietta Bird, renowned advice columnist of Woman’s Friend magazine.

Mrs. Bird is very clear: letters containing any Unpleasantness must go straight into the bin. But as Emmy reads the desperate pleas from women who many have Gone Too Far with the wrong man, or can’t bear to let their children be evacuated, she begins to secretly write back to the readers who have poured out their troubles.”

Seems Intriguing right? Once you start reading the book; you realize that 1- it is a very easy read and that 2- you think you like the book. Once you finish the book and actually begin to think about the story… you are left with this dread. With this “What the hell?” type of feeling. At first, I truly felt that it was just me; that the other D&O gals would say “WHAT?! Karie no! the book was good.” So the night of the meeting came and the verdict? Many felt the same. The story, although easy to read and you wanted to route for the characters left you unfulfilled. The main Character, Emmeline Lake, left you feeling like you wanted to knock some sense into her. The characters around her, that just let her get away with her antics, also left you questioning humanity (Not in a deep sense but in a “Would this really happen” way). She isn’t the go-getter that the synopsis would lead you to believe, instead she is self-centered, careless, immature character that really…. you want to smack up side the head and say “what are you thinking?”.

The end of the book leaves much to be desired as well. The author manages to wrap it up in a bow and the pieces that don’t tie up… are not mentioned. It really is sad that a book that we thought was going to be interesting/enjoyable left us not wanting more and truly not excited.

Any D&O’s out there that have any thing that they would like to add… please do! And for those of you reading along… what were your thoughts on this book?